Looking for an apartment in Copenhagen? Then you have come to the right place!

First of all, finding an apartment in Copenhagen can be quite a challenge. There are a few things you need to know first:

There are thousands of people looking for rental apartments in Copenhagen, so if you do get an offer, act quick! Normally rental apartments in the private market gets signed within 24-48 hours after they are announced. Call instead of emailing if possible. Get to see the place the same day, and be ready to sign the contract on the spot.

Be ready to pay a high price

Because there are so many people looking for apartments in Copenhagen, the prices are high. To give you some ideas about the price level, a single room around the city center will cost you from DKK 3.000 up to around 5.000 per month. The closer to Rådhuspladsen and the city center you are, the higher price. Rooms are definitely the easiest form of accommodation to get in Copenhagen.

If you want to rent a full apartment, the prices rises drastically. Because everybody wants their own apartment, the competition is a lot higher, and the amount of available apartments is a lot lower than rooms. The price per month depends a lot on which area it is in and the size. You should expect to pay from DKK 8.000 and up to 15.000 per month for an apartment. You can take a look at different options at Boligportalen.dk. Most ads are in Danish, but Google-translate it. If the ad is more than 3-4 days old, it is probably not on the market anymore.

Copenhagen city is divided in different areas. In the following you will find a short description of the area, and if that area is a cheap, medium or an expensive area. 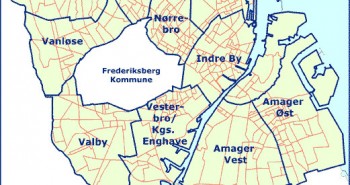 Indre by, or the city center is the most expensive area. There are not a lot people living here. It is mostly stores, restaurants, bars and companies that have their address here. Also, it is not very practical to live in the city center, because there are few grocery stores and a lot of noise. So if you don’t like lots of noise all the time avoid Indre by.

Vesterbro used to be a pretty trashy area, but has been under some serious change the last 10 years. It has become a very popular area for especially young people, but in general there is a good mix of both singles, couples and families living here. Vesterbro is pretty close to city center, so it medium priced, meaning you can get a room for around DKK 3.000 here.

Observation: Closer to Central Station Istedgade is the street with all the sex toy stores, prostitutes and drug addicts. Just to consider.

Kongens Enghave is a little further away from the city center, meaning slightly easier to get a place to live, but don’t expect anything below DKK 3.000 for a room. Enghave is absolutely an okay place, Make sure to find a place close to a train station, or one of the A-busses. Alternatively get a bike, like the rest of Copenhageners.

Nørrebro is pretty close to the city center and is an area stuffed with diversity. It s a very multicultural area with a high percentage of middle eastern immigrants – and from all over the world in general. Nørrebro is one of the easier areas to get an apartment in, and it should be possible to get a decent room from around DKK 3.000. Nørrebro is a pretty big area, so get a room which is close to Nørrebrogade, which will give you great access to the busses.

Østerbro is a very nice area – but also very expensive for rental apartments and rooms. There is not much partying going on in this area, but if you like it classy, then this is the area for you. Expect room prices to be at least 4.000 and up.

Frederiksberg is also a very nice area. It is high priced, but if you can find a place near Frederiksberg Allé, then you are close to metro, busses and a lot of nice stores.

Hellerup is very expensive. It is priced at the same level as the city center, and it is pretty expensive to live there in general. Avoid unless you got a rich uncle, who is willing to pay.

Vanløse is a pretty relaxed area, and feels a little like a suburb to Copenhagen. It is well-connected with both the metro and trains. Prices here will probably be cheaper than Vesterbro and Nørrebro.

Valby is a little away from the city center, but still very reachable with the trains. There a lot of apartments in Valby, and the competition for accommodation is lower here.

Amager is an island, but is connected with small bridges to the city center. Amager is divided into a western and an eastern part.

The subareas of Amager are:

Islands Brygge is a very popular area, and don’t expect to be able get anything in that area. If you do, it will probably be medium to high priced. We know a few people, who have been lucky to get something on Islands Brygge, and is definitely one of the cool areas, especially in the summer time.

Amagerbro is a fine area, and is connected with metro (subway) to the city center. We know a good amount of foreigners who have found a room in this area.

Tårnby is a pretty boring place, sorry to say. You can probably find something pretty cheap here, but be ready to have problems with late-night transport. It is not located close to the city center so the price of transportation to get to the city center is higher.

Kastrup is where the airport is. It is pretty well-connected with metro and trains, and you will be able to reach city center in 15 minutes with public transportation. Be aware that the price with public transportation to the city center is also higher. Kastrup can be a little difficult to get a room in, mainly because all the people working in the airport wants to live close to it, but your chances here are probably better than on Vesterbro and other places on Amager.

Be ready to live outside Copenhagen

Because the competition for apartments and rooms in Copenhagen is so high, you can be forced to live in Greater Copenhagen. Greater Copenhagen contains the suburbs like Hvidovre, Rødovre, Albertslund and more. If you are going to stay short time in Copenhagen, try to avoid these areas. You will spend too much time on transportation, but in need of emergency you can find something decently priced in those areas.

In mid-July all the people who have applied for the universities and other educations will know if they have been accepted. This means that a lot of people will be looking for rooms and apartments from Mid-July to October. If possible, try to avoid arriving in Copenhagen around August – it is a chaos every year.

Sharing an apartment makes it easier

If you are a couple of people, who are willing to share an apartment, you can lower your cost of living. If you can share an apartment which costs 8.000 per month for three people, then your monthly cost is lower if you each had a room. So think in the possibility of sharing when you look.

Even though Denmark and Copenhagen is a very safe place, the apartment market is full of scams. Mostly the scams are that the person you are renting from, doesn’t own the place, so get the person show some ID with the address on if it is not a company renting it out.

A few tips to avoid that:

Document the state of the apartment

When you have signed a contract, one of the most important things you should do, is to take pictures of all damages there may be. Cracks in floors, water damage… any damage at all, so when you move out, you can always document how it was when you moved in. The deposit is used to cover any damages, and unfortunately a lot of the evil landlords have a tendency to make you pay for damages, that were already there when you moved in.

It can be a little overwhelming finding a nice place, but all the foreigners we know have all succeeded, and so will you! Happy hunting!

Where to find a cheap haircut in Copenhagen

How to make your relationship survive life as expats

Veggiesouls.com has all the vegan recipes you would ever need. Check them out here! 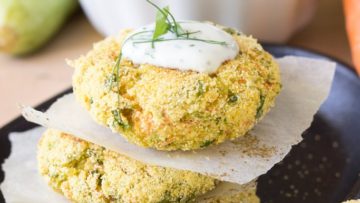